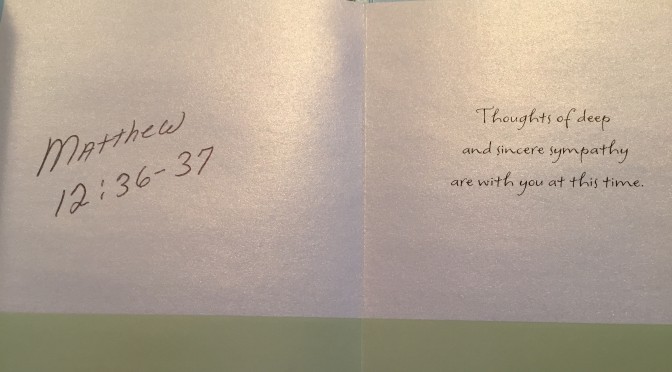 This is the eighth in what has unfortunately turned into a series of articles. Here is the seventh, and here is the first.

Since writing this, I’ve spoken to a person who knows Helen personally and confirms that the suspicions expressed in this article as to the source of these cards are true.

We have one of those US Mail “cluster boxes” at the entrance to our subdivision. Apparently the rising cost of postage doesn’t cover the cost of walking all the way to my front door, like it does for the homes a block away in an older neighborhood. As a result, I don’t pick up my mail very often. Maybe once a week or even once every other week. So our mail ends up coming in very large batches.  I normally sort the mail into “open eventually” and “recycle right now” piles. The former is divided into “business” and “personal” mail. Business mail gets taken to the office. Personal mail tends to sit unopened. All my important bills are paid automatically. What could be worth opening?

Today I received two hand-addressed envelopes, sent to me by my first initial and last name, and both sent from Oklahoma City, OK. Neither had a return address. One was sent three days after the other. It’s unusual to get a hand-addressed letter these days, so I opened the two cards right away even before finishing the sorting.

They were sympathy cards. That’s odd, because nobody close to me has died recently. They were unsigned, but each had a Bible reference hand-written inside. This is not an unusual way for Christians to wish each other well — sending along a Bible verse for encouragement. Nobody ever actually looks those up — or they’re so familiar that we don’t need to. But since I wasn’t expecting any sympathy cards and since these were unsigned, I thought the verses might contain a clue as to the identity of the sender and the reason he or she sent them.

Not your usual sympathy-card verses.

Both passages share the theme of judgment for good and evil words. Was someone trying to acknowledge something good I had said, or rebuke me for something evil? Given that they were sympathy cards, I can only assume the sender is saying that I or someone close to me should (or will) die for something evil I said. But who might think that of me?

I checked the postmark. Who do I know in Oklahoma? Nobody!

Wait… I do know somebody in Oklahoma!

Turns out Helen Joanne Pearce, my favorite Florida felon, is from Chickasha, OK — about 40 miles from Oklahoma City. Her parents still live there — at the address Helen cited in her petitions against Doug and me when she asked the court for an injunction against each of us. When Doug went to his hearing in March, Helen’s dad had come from Oklahoma to accompany her. I don’t know if he came for my hearing, since I stayed home and sent my High Priced Lawyer in my place. My High Priced Lawyer doesn’t care whose daddy shows up for the hearing, so he didn’t say if Helen had anyone with her.

If Helen’s parents have been to this site they know I’ve never involved them in this matter. I have no intention of harming or even visiting them. I’ve never threatened them, never spoken to them, never even exchanged emails with them. I’ve never published their names or their address in connection with my investigation of their daughter’s fraudulent activity. I’ve never asked anyone else to contact them on my behalf.

My only concern for them is as a fellow parent of adult children. If I was in their position I would want to be aware of my daughter’s bad behavior for a couple of reasons. First, so that I could encourage her to change her ways and take up an honest profession. Second, so that I could be planning ahead for the future of my grandchildren in the event she ends up doing time for her multiple felonies.

Is it possible these anonymous cards are from someone else? Perhaps a disgruntled customer? Sure. But I’ve been doing this for almost 30 years now and I can tell you the usual odd stuff I get in the mail isn’t anything like this. It’s usually end-of-the-world prophecy newsletters, but I’ve also seen perpetual motion machine investment opportunities and — my favorite — a brochure on the benefits of castration for holy living. This is different.

And it’s unusual to get something anonymous. Most people want you to know who they are, because they see themselves as living prophets — the most important people on the planet.

And what a coincidence that this shows up at a time when I know I don’t have any heated discussions going on with customers, people on Facebook, members of my church, neighbors, etc. but I do have a rather incendiary website dealing with an un-convicted felon with ties to the location from which these cards were ostensibly sent.

And what a further amazing coincidence that the handwriting matches samples of handwriting in my possession known to be from Helen’s father.

In the meantime, I want to make sure this information is made public so that if I or a member of my family goes mysteriously missing, law enforcement will have a place to start. At a minimum, even if not involved in the death of me or a family member, the sender is already subject to up to five years in prison for sending threats through the US Postal Service (18 USC Chapter 41).

I am intentionally not posting pictures of the other card nor the envelopes. I am not posting any of the evidence I have that backs my assertion that these threats are from Helen’s parents. This is done in an effort to not elevate this aspect of the investigation, since it involves a third party against which no allegations of wrongdoing have been made as pertains to Helen’s fraudulent real estate activity.