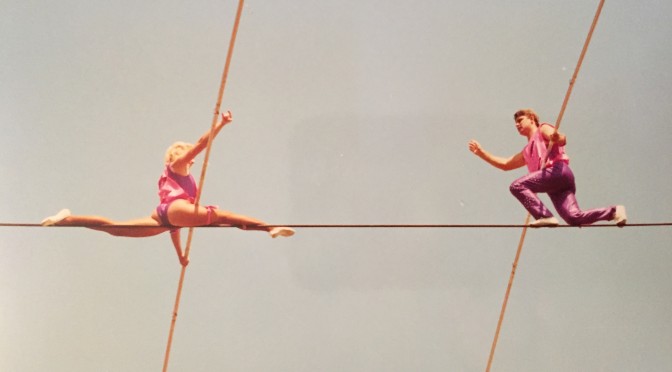 In 1988 we took our kids to Circus World in Baraboo, WI. We had the good fortune to see Enrico and Debbie Wallenda performing on the high wire. The crowd was small, so we had a chance to chat with them after the show.

I noticed that, while they performed without a safety net, they had laid out some tumbling mats under the wire, which was some 20-30 feet in the air. “Why bother with the mats?” I asked Debbie. “Our insurance company won’t let us perform without safety equipment,” she said. 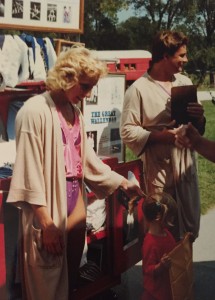 Enrico and Debbie come from a family of circus performers that goes back to the 17th century. They grew up on the wire. They know what they’re doing. The safety net is unnecessary. It would just slow down their set-up and be one more thing they’d have to carry from show to show. And it would be an insult to them. Amateurs need and use safety nets. The Wallendas just don’t fall.

Well, they do, but no more than once each.

I’ve been programming since about 1974 and doing it professionally since 1982. I remember my ham radio buddies talking about these cool new things called “microprocessors” in 1972, and was actively programming for them through the entire history of the “personal computer revolution”. I wrote a machine language debugger for the Motorola 6502 just for fun back in the early 80’s. I was working with touch screens in 1982 while the company that would eventually put one on an iPhone was just beginning to experiment with mice and graphical user interfaces.  I wrote drivers that allowed CP/M systems to store data on “magnetic bubbles” that raced along a track driven by an electromagnet. I was writing code to calculate position using GPS when there were only about 8 GPS satellites in orbit and we had to calculate what ridiculous time of the morning we’d have to come in when we would be able to see the required minimum of three of them at the same time for testing our software.

When I’m making updates to the scripts and pages on our Laridian website, I operate directly on the live server. From time to time that means if you happen to be on the page I’m on when I make a mistake, you’ll see an error message when you load the page. But that happens only rarely. When working on a critical part of e-commerce code, I might test on a private page before going public, but often that isn’t practical.

Running a beta testing program with outside testers, especially for a platform like iOS (which requires encrypting the app in a particular way that allows only selected devices to run the program), is difficult and time-consuming. So most of the updates I do for Mac and iOS programs are just tested by me before they are shipped. Often, I’m a better tester than real customers, because I know the scope of the changes I’ve made to the code, and I know where it is susceptible to error. For example, all the testing of synchronization of user data was done in-house. I was able to set up both common and unusual situations to verify how the system would handle the data without putting any real customer data at risk. When the time came to put that system online, it just went online without any beta testing.

So I sympathize with the Wallendas. That safety net takes a lot of time to set up. We know we’re not going to fall. And it takes away from the perception of professionalism — anybody can walk a tightrope when there is no harm in falling.

But when we fall, we fall hard.

Last weekend I shipped an update to PocketBible for iOS that was not tested by outside testers. The majority of the changes were to accommodate the larger screen of the iPhone 6 and 6 Plus. I have an iPhone 6, and I can emulate the 6 Plus in the development environment. Those changes were well-tested.

The other type of changes were related to what happens when you change the password on your Laridian account. Previous versions of the program assumed you were logging into a new account when you entered a different password, so they blocked you from sync’ing your notes, highlights, and bookmarks with the server (so as not to corrupt the “other” account’s existing data, nor corrupt the data on the device with data from the “other” user). Furthermore, they would delete all your books (assuming, again, that you are a different user with a different library of books). The new version of the program records the Laridian customer ID you’re using while sync’ing your database with the server, and only complains about your user data if, when changing your password, you log into a different customer account. Furthermore, it doesn’t delete your books. (I plan to handle that a different way in future releases.)

So while testing the screen-size changes on the iPhone 6, I also tested the new way of determining if you had logged into a different account. It worked great. What I didn’t count on was that Apple had completely changed the way certain user interface objects worked on the iPad sometime in the year since I had issued the last PocketBible revision. As a result, iPad users couldn’t update their data to support the new customer ID tracking method. My testing on the iPad consisted of bringing the program up and trying a few things to make sure it wasn’t completely broken. Since the bulk of my changes were related to laying out the user interface on the larger iPhones, my testing focussed on making sure I didn’t break any layout code on the iPad. I already knew the customer ID tracking worked from my tests on the iPhone.

I joked with one long-time PocketBible customer that I didn’t want to take time to do a beta because I knew he would find problems that I would have to fix. So I shipped version 3.2.0 without the benefit of his help.

Once Apple approved the new version and I installed it on my iPad and saw what was happening, I knew I was in trouble. I began thinking about how those tumbling mats were going to feel when struck from this height.

When Karl Wallenda fell to his death from 120 feet, the family went ahead with their show the following weekend. That’s what professionals do. In my case, I admitted to the mistake immediately, pulled the app from the App Store, posted prominent notices on our blog and on Facebook, and went to work to find the problem. By 2 AM I had the first round of fixes made to the code. After a short nap, I found and fixed the rest of the problems (which required examining about 300 places in the code) and was ready for beta testing by mid-afternoon. We went through three beta versions in 24 hours, and I didn’t upload the final build to Apple until I had a clean bill of health from the testers.

Apple cooperated by approving my request for expedited review, and accomplishing that review within an hour.

In the end I was able to stand up and walk off the mats under my own power. The fans were great; they encouraged me by applauding through the whole thing. I was concerned that some would want their money back, but I got not a single complaint.

While I probably won’t be shopping for a safety net, I may consider doubling the mats.