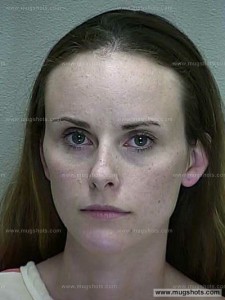 This is the second in what turned into a series of articles. Here is the first and here is the next.

Is this the face behind the phone call?

A Facebook friend forwarded a link to a Facebook profile for Helen Pearce that has a number of suspicious similarities to our friend JJ Pierce of Flat Stone Capital. According to her profile, she’s married to Matt Pearce and they live in Celebration, FL.

I think this is JJ. I’m going to see if I can stitch it together here. As I’ve said before, there’s always a chance that I’ve stumbled on the wrong person. But there are a lot of reasons to believe this is the one.

In Faith Properties and Husband Matt

Online complaints about rent-to-buy scams mention In Faith Properties as one of the companies involved in these deals. Marion County Florida small claims court case 07-569-SC names “Matt and Helen (Joanne) Pearce DBA In Faith Properties, Inc.” as defendants. The plaintiff won her house in Silver Springs, FL back from the Pearce’s on Feb 21, 2007. The final judgement is below. 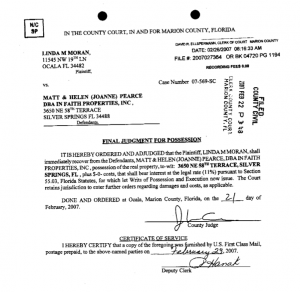 Helen’s parents still live in Chickasha and she is friends with them on Facebook.

Connection to University of Central Florida

Matt and Helen operate a fitness website at www.pearcefitness.com. It features a form to submit prayer requests and another to request a free Bible. Redfield Holding’s website has a similar form for prayer requests and another similar form for a free Bible. It’s great that these websites present opportunities for visitors to share their prayer requests and ask for a free Bible for themselves or a friend, but you have to admit it’s quite unusual for a business site (other than a Bible-related business) to offer such options. The fact that these two unrelated sites feature the same unusual features and are operated by people with the same last name suggests that the people are one and the same.

Several of Helen’s real estate businesses have AOL addresses, and my comments on that are what set JJ off. I commented in my previous post that JJ “must really admire people with Juno accounts” (because Juno has an even worse reputation than AOL when it comes to the sophistication of its users). Ironically, Helen has a Juno account that she hasn’t yet shared with me. I find that hilarious. (I’m sure you luv Matt, too, Helen.)

Why Am I Doing This?

I personally don’t care if Helen takes advantage of desperate people who are hungry for any offer to sell their house. But as a nice lady at church once told me (that’s a story for another day), “you’ve poked the bear”. I never would’ve bothered to figure all this out if “JJ” hadn’t called me a “fool” then threatened to sue me for “slander”. I think it’s important for people to know who they’re dealing with when they get that anonymous phone call and surprising offer by email. Not everyone has that little red flag that goes up and warns them not to accept. I am that red flag.

Matt is Helen’s fitness-obsessed, day-trading, Hummer-driving husband. From the pictures I’ve seen of him, he doesn’t look like someone you’d want to mess with. Especially if you’ve read his rap sheet, which in addition to issuing fraudulent checks includes child abuse, assault, and felony battery. In particular, I don’t recommend anyone outing his wife for her questionable real estate activities. Oh, wait….

Update: Feb 21, 2014
Helen is an actress according to her IMDB profile. Tip o’ the hat to David in our Canadian research office for this one.
Helen is an author according to this single-entry blog. Tristan turned this one up from our Texas branch.

Update: Feb 23, 2015
Helen accidentally confesses to multiple felonies: Intentionally providing false information to the Florida Department of State while registering one of her LLCs, and entering into contracts under a false identity.